Its been over a month since my last review. All I can say is that I lost motivation for a while. It happens to us all, right?! However, I am back, at the very least to finish what I started in the summer, and write the reviews that the lovely bands listed here agreed to be interviewed for. Its been on my mind and I have kept on saying, tomorrow tomorrow but today is today! No...really, it is.

Some of you regular readers (anyone?) may be wondering who has brought me out of my funk. The answer is a rock band based in Ireland. I would at this point tell you who is in it and such but all that is covered in the interview below. So without further ado, I introduce you to… 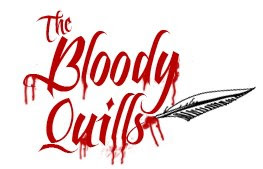 Another great Twitter find (or rather they found me) that managed to catch my attention when the lead singer Keith Grace (with pseudonym Paranoid Erik) kept tweeting random song lyrics! With my attention caught I clicked on the link to the bands website. The first thing that you are met with is a large amount of text, but something in amongst that  text caught my eye! It was a line that said:

“you don’t need to be a musician to join the band, you just have to love music”

I have always wanted to join a band! So I now consider myself an honorary invisible tambourinist of The Bloody Quills or HIT for short – and every band needs a HIT right? – I best not mention my dance track or hilarious jokes as I could be kicked out on my invisible ear!

The Bloody Quills debut album was released a couple of weeks ago on amazon and is now on iTunes, I bought it when it came out – a total bargain! 15 songs for a mere £7.49. I have listened to it a lot and with each listen I get more favourites tracks.

If you have listened to any of the bands previously reviewed then this is going to be quite a change. Unfortunately, I don’t have loads of clips and links of tracks (if you have Spotify, they are on there, so you can try before you buy) but they have just completed a video to Malahide Girls which you can see below.

The first track on the album is;

The intro takes me back to 90’s movie soundtracks. The lyrics to this are pretty funny;

My suspicions started growing
when I noticed she was 8ft tall,
I threw up and said I must be going
She said my numbers on the bathroom wall.

but the actual message in the song is quite sad as the song goes on to say that she doesn't want to go home alone.

The Pursuit of Pleasure

This song is great, it is multi-layered, with a perfect song title and a real Blur vibe. It simultaneously reminds me of Black Grape with the shouty statement lyrics but I always think of Bowie when I hear it. The amusement/fairground music just rounds it all off nicely with a climatic ending! (she said winking, oi! oi!)

This is the love song off the album…what? its not?..ok, in my eyes it is! Obviously I love it due to its quick tempo, upbeat feel and shoulder bouncing vibe. The lyrics arent that plentiful but at 2.59mins they're more than enough. Now I have noticed I have said upbeat, I feel I should mention it is not an upbeat subject matter.

This is ‘Last Train’s fraternal twin. Another love song about leaving but this time its not what is wanted. ‘Last Train’ is like go get out, and ‘Sunligh’t is more you are draining the life out of me and I don’t want you to leave but if you stay then it wont get any better so bye. This is obviously my interpretation! I have no clue if that is the meaning of the song. You'll have to have a listen and see what you think.

Other tracks that I wholeheartedly recommend are;
The Bloody Quills recently recorded a video to the third track off the album called ‘Malahide Girls’ – now I should warn you that this song can create ear worms, sometimes, and completely out of nowhere, I find myself singing..Malahide giiiiiirls….malahide giiiiiiirls! It seems like a chilled out song but don’t be fooled! Its hard to erase once its in there. I was following @TheBloodyQuills on Twitter before and during the making of the video, so I had a clue that it would have something to do with a country house and a ballerina. Here is the end result;

I also managed to corner Keith into agreeing to do an interview…it is the shortest interview to date and I feel like I should have asked more or maybe something intellectual.

Can you give me a brief history of the band to date?
Well Gareth and Paranoid Erik met last September , recorded 15 songs together with Percussionist Kalille who's friend Jose joined us for four rehersals in August 2012.

The name of your band is The Bloody Quills, where does that come from?
I was calling the project Soren Lorenson during recording and I was gonna go with that but then I thought Paranoid Erik might be better. Gareth said 'What about 'The Bloody Quills'? and I thought 'Bastard!'


Who or what do you think has been the biggest influence on your music?
The Spirit of Gareth , Kalille ,Jose and our mentor Terry of course. Oh and the fucking Rolling Stones.

What has been the best gig you have played so far and why?
Best gig was at The Aviva Stadium Dublin Ireland.It was a charity gig and the band set up the Backline and went for a swifty (drink) , only to return to find someone had forgotten the sprinkler system was on a timer. Exit Stage Left.;)

I am always curious as to which song bands would cover if they went on the radio show
'Live Lounge'...so, which song would you like to cover in that situation?
I would choose to cover Cat Stephens -I Love My Dog right now , tomorrow it would be The Rolling Stones -Gimme Shelter and on Tuesday it might be Fleetwood Mac -Sara.

Finally, what’s coming up for you guys for the rest of the year?
Kalille is back from his month long home visit to Mauritius so we are back rehearsing . Hoping to not have to rummage through the skip outside the studio for girlfriends gifts. Hope that we get to play the music well and the right people get it. Also giving Kate a big kiss.