Now for something a little different! I have probably been aware of this band since around the same time as Monsters Calling Home, which is a fair long while before the bands that I have blogged about so far. It was way back, when I reviewed the Mutineers, that I mentioned how I liked a singer with a distinctive and memorable voice. This bands singer’s voice is very deep and to me it sounds as though he has a bubble in his throat and that intrigued me. The band are originally from Croatia (now living in NYC) and the vocals are also affected by the fact that English is the singers second language. From the very first listen I immediately knew that they would be listened to a lot. It’s just a shame they only have one EP out.
The band is made up of;


Sadly there isn't much online about them even though they have been around for 10 years and were very successful in Croatia (as Indigo), they even supported Robert Plant and the Arctic Monkeys when they played in Croatia.

At first I was stumped, and still am, because the vocals are that distinctive it is difficult to say immediately that they sound like such and such. Musically however, they remind me of Interpol, in particular this track:

So who am I talking about? 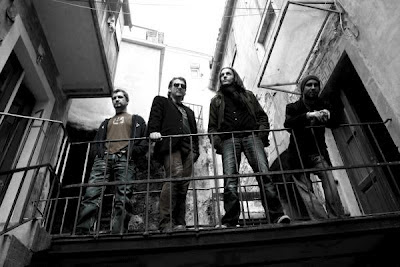 Their EP has six tracks, and the first one up is the title track, it is the longest track on the EP at 5m 43s and the singing doesnt start till 1m 40s. Now I don’t know what exactly the song is about, and I have asked Frane to tell us although he omitted to ;), but surely one of the most unexpected lyrics to date has to be ‘I want to be invited, by that supersonic mouth’ - I think it is probably open to your own interpretation. Have a listen on Spotify if you can as its not on YouTube.

The first track on the EP is 'Weekend At December', when it starts it sounds very dancey to me, reminiscent of the Prodigy, but then the indie guitar comes in. Interestingly, the techno effect remains throughout the song (albeit in the background) and it is well matched to the vibration in the singers voice.

One of my favourite’s and the last clip available is Skeleton Party Nose. Never heard a song title like it, but love the song.


Its a shame that I haven’t been able to show you clips of any more of the tracks from the EP, but if you have Spotify then check it out there, or better still buy it from iTunes (http://itunes.apple.com/gb/album/silent-part-of-talking-loud-ep/id505231374), and check out another favourite ‘Momentary’.

The lead singer Frane was also kind enough to agree to an interview, so lets get to know them better...


Can you give me a brief history of the band to date?

We started as a group in 1997 and from that time guitar, keyboard (Tico) and myself (now on vocal and guitar use to play bass at that time) are still members of the group. We wanted to write as a band in English,
but it was hard to find someone here to sing in English because many of musicians in Croatia at that time were influenced by local music, so we recorded two albums in Croatian with one other member on vocals. This band always wanted to progress and in 2009 we reach that point when our music didn't make any sense for us to sing it in Croatian and former singer have to leave so I became songwriter of the band. I took that role and replaced a bass with guitar and vocal...so that was the new beginning of this group which is later filled with a new drummer Nick Lush in 2011. This is also the year we meet our manager from New York Benny Doro the guy who recognized this band and doing great job for us along side our US PR team! we are also please to say that part of this team is Mr.Mike Branvold, he is in "top ten must follow" on twitter and other social networks, by all relative music and marketing media...

The name of your band is In The Go where does that come from?

In that Croatian period we were named Indigo, so we just turned it into "In-The-Go" which actually really describe the vibe of the band...since we started we have not stopped for a second we are always on the move ...we truly are In The Go.

Who or what do you think has been the biggest influence on your music?

All 4 of the band members have their own music taste and influences and of course we have the same influences as well. There is a lot of amazing music out there, but what we grew up with is The Cure, Depeche Mode, Joy Division, David Bowie, Radiohead...etc. Today we listen lots of different genres from indie rock, electronic, rock n roll , lots of underground bands too...we love to hear new and in a way different approach to music no matter what genre it is!

Well if we talk about In The Go era (and we should :)) it was the big one right at the beginning. We decided to apply for Arctic Monkeys show in Croatia and they chose us among other bands here (There were over 5000 people at that show). We didn't even have a contract yet, but a friend of ours informed us that we are on their web as a support group, that was cool and a bit scary too because we just started as a new line up in the group and for me that was my first gig as a vocal and it was really great!

So far, what has been the most memorable gig/event that you have performed at and why?


I think the I just answered this :)

Croatian is your first language, do you write your songs in English or in Croatian and then translate?

We write in English, or better to say we try LOL, English is more fluid and gives you a chance to write in a different way, even to write it in a way that is not common and still can sound interesting! To write in
Croatian and then translate it that would be something to laugh about...Croatian language is very beautiful, but very hard and complicated.

What is the song writing process for you?

Me personally, wouldn't play at all if I didn't write. Writing and recording sometimes is more fun to me then play live! Even writing and playing live is two different worlds of music. Basically what we do and how we write is that I come up to the guys with idea on acoustic guitar and then we as a band work on it together . I think there is always a few version for one song until we are pleased with it. Some songs just come out at very first moment like "Weekend At December."


What is your favourite track off of the EP? and what is the track that fans always tell you is their favourite?

We always love our latest songs :) Even our EP "Silent Part Of Talking Loud" is out just few months ago, we already recording new songs...so from that EP probably Weekend At December...just next to Silent Part... that's what fans also like the most. Recently people come to us with songs "Momentary" and "To Be Is To Move" as some of their favorites. I think this Ep is one that needs few spins before the songs start to grow on you.

What is your most memorable fan encounter?

Yes, the one from Arctic Monkeys show when few people from England asked us " Hey guys your sound is awesome from which part of UK are you from"... that somehow confirmed us that we are heading in right direction!

I am always curious as to which song bands would cover if they went on the radio show 'Live Lounge'...so, which song would you like to cover in that situation?

We did few covers in our history and always try to play them as our song (Like Van Halen does when then cover a song). We covered Bowie , The Cure, Depeche Mode...Recently we played Joy Division...now....probably Joy Division - Love Will Tear us Apart, but only in In The Go version!

Finally, What is coming up for you guys for the rest of this year?

We just come back home from Serbia, played Exit festival which is one of top 10 in europe. We have a week of preparation as we are heading for New York at the end of the July for meetings, interviews ...US tour after the summer etc.,so more info on that soon!


If you aren’t following these guys on Twitter/Facebook or in some form then you should be! Check out the links below and give them a follow.