This band only appeared as a twitter follower of mine on 10th July but after listening to a few tracks I knew that I wanted to review their latest album. As much as I like music that is different, that challenges my opinions and opens me up to a whole new genre, I was happy to hear this more traditional indie rock band. 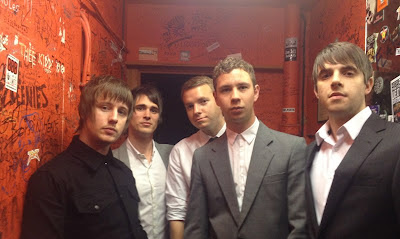 The Chase are a five-piece band from Portsmouth made up of:

They have been compared to The Jam, Stereophonics, White Stripes, & Oasis. The lead singers voice is very much like that of Liam Gallagher in style and I have struggled to find someone else who he sounds more like. So I scrolled their Twitter feed and someone on Twitter said they reminded them of the Bluetones! Lets see...

Undecided? Lets take a look at the first EP. The EP called 'Ever, Never or Now?' was released in 2010 and consists of six tracks. Lets listen to a couple, first up the track that screams Oasis...


The song that has may not be as polished as the other tracks on the EP but has a great message in is 'Headlines' with;

With every step you're finding a way,
to move past the things that stand in your way
you hold the key to all of your dreams
open he door to find what it means

But my favourite from the EP is One More Time, check it out on Spotify or better still buy it from iTunes! lol

'Slings & Arrows', their album released in January 2012 for me shows some musical growth and them establishing their own sound away from Oasis but keeping that strong influence. I don't know if they are there yet but I do have high expectations for the third album and I am looking forward to seeing them develop as a band. Listening to a podcast the band were involved with they seem to agree that they are finally establishing their own sound from their amalgamated influences.

Highlights of the album are;

Others that get a mention are Tonight, Touchpaper and A Different Place but my absolute favourite is On My Way and unavailable on YouTube or SoundCloud, but trust me it's good. As a consolation here is;

The podcast that I mentioned earlier is an hour long interview and covers everything you need to know about the band. It is well worth a listen if you want to know what the guys are like.

Interesting points covered in the podcast if you are strapped for time were;

During the interview, they discuss their drummer and their expectations of surprises from him on the third album. Yes, they are talking already about the third album, no resting on their laurels.

They feel that their current tour has been a real learning curve for them as a band, they have got to know each other much better as this lineup (since 2010) and are more aware of each others strengths and weaknesses musically.

They consider the third album to almost be like the first, as they feel that the first two (self-produced and recorded in people's homes), which were promoted via social media, to some extent are unlikely to have been heard by many, but they think this third one will be.

It also covered the bands history, who writes the lyrics and the music, what and who they are inspired by, what they feel about their music, how social media has figured in their band publicity, performing live & getting gigs, self-promotion, the current tour and really, what's left to ask them?

So I had to dig deep on the interview front...and opt for the random question route, would they answer them? Of course! and unlike the interviews so far more than one band member took the time to answer. Thanks guys.

1. Which track are you most proud of?

Mike: My choice is 'Home & Tea' from our second album 'Slings & Arrows'. It's just one of those songs that came really easily and everything seems to fit. The melody, the piano, the strings, the big drums on the chorus. I'm really happy with the lyrics on that one as well. It sounds a lot different to any of our other songs. Quite a Kinks-y, 60s feel.

Harry: 'Touchpaper' for me. I love the immediacy of that track.
Luke: Would have to say 'Losing Control', it's got everything you could ever want in under 3 minutes

Ralph: 'The Decline of Mr. Top' - I love playing this one live. Great drums. Always gets the crowd going.


2. You write a song and it would be perfect with some female vocals on it, which female singer would you collaborate with?

Luke: Well I think Nico's voice is beautiful but she's not with us anymore so probably Alison Goldfrapp.

3. You have been touring together for a while now, who has the most annoying habits?

Definitely Harry Street. You've got to be on your toes around that one. We won't go into any more detail!

4. What is your most memorable fan encounter?

Ralph: Being asked if we play any drum and bass by a coked up girl in Westbourne.

5. If you were to co-ordinate a flash mob, where would it be and what would everybody dance to?

Luke: Waterloo station and everybody would have to dance to 'Comfortably Numb' as I think it would be briliant to see anyone try and dance to that.

Mike: Wembley stadium and they would dance to The Chase.

6. In the film of ‘The Chase’, a biography of the band – which actor would play each of you and why?
Luke: I'd be played by Benicio Del Toro because if I went to las Vegas I think I'd act like him so I think it would work vice versa. Morgan Freeman can play the other roles.

7. Finally, what;s coming up for you guys for the rest of the year?

We're working on a few new tracks at the moment. The plan is to get some new music released before the end of the year, maybe an EP, and get a new album done for next summer. After this tour we'll do a few big gigs before Christmas.

I will definitely try and catch them later in the year, so keep an eye out for a gig review. If you like what you hear check out some of the links below and share this blog post.