Many of you will know that there are a hundred and one music apps (possibly a slight exaggeration) out there where the musically minded can upload tracks for 'us' the audience to have a listen and either go...

...and one such site is called SoundCloud.

Now the nature of this site is that you can follow people who are also registered on the site, and any tracks that they upload, favourite or download you will see on your timeline. It’s a bit like Twitter, where you can see what the people you follow have favourited. The only difference being that these tracks will appear in your timeline regardless, whereas in Twitter the person has to retweet in order for you to see it (or you have to look up their activity).

So one sunny day I was on SoundCloud and I noticed a track that someone had favourited. The track was called ‘Hurricane’ and was by a band called beethum. Now, if you are an older person (NOT old!) like me then this might bring to mind Beechums (Cold & Flu) and I considered that enough to warrant a listen. That was my first experience of the band to be reviewed here, and so with out further ado, put your hands in the air like you just don’t care and welcome… 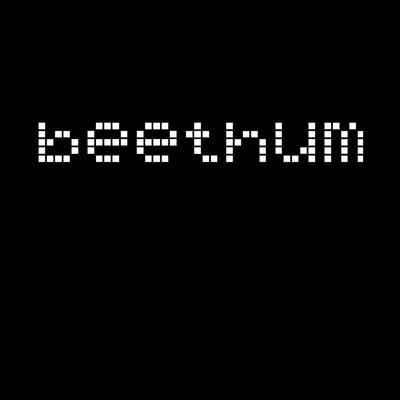 I think the best description comes from the band themselves on their SoundCloud page.

"beethum's core consists of four friends, although occasionally additional contributors are drawn in. All those involved share a love for the textures and sounds that can be created by all things musical. Acoustic and electronic instruments sit side-by-side, sometimes easily and sometimes discordantly, to create a sound that can be both beautiful and challenging."

Can you give us a brief history of the band?

'beethum' is essentially four friends who decided to get together on a regular basis to make some noise. After a bit of messing about playing covers (really badly), we swapped instruments and Heath started writing his own songs.

[Identities are top secret (I will assume they are the teenage mutant ninja turtles!)]

Now doesn’t that sound like a band that you want to listen to? I am tempted to push you in at the deep end with ‘Hurricane’ but lets work chronologically shall we? Or at least I think its chronological…

Are the tracks that are uploaded on SoundCloud done so in the order that they were written and recorded?

No not really. We do have a couple of albums and most of the songs on soundcloud belong to either of these, but we've thrown in a few recent tracks that are still in a relatively raw state. Album wise we recorded 'Songs for the Number 8' first, followed by 'Food that Moves', and we've got another in the pipeline with the working title of 'Clicking in Silence'. We don't tend to record songs with a view to them sitting consecutively on an album, in fact we usually have several songs, or parts of songs, on the go at the same time. Some songs take months to complete, others seem to get resolved much quicker.

There are 27 tracks available for your listening pleasure and I have decided to look at some of my favourite tracks (obviously) in the order that they have been uploaded. They are also divided into sets, so lets start with the set entitled:


Songs for the number 8


As is my way, when I listen for the first time to a collection, I favourite/star those that have ‘kerb’ appeal. You will need to bear in mind that this is ‘kerb’ appeal that catches MY ear. It also lets me see how my feelings towards a song change over time. There were three tracks from this set that instantly I thought…

…or rather, lets favourite that one shall we missy anne…don’t ask!

I am going to suggest that you open soundcloud (click on any of the songtitles to take you there and listen along) :) The songs were:
Can You Fly

A track that comes before ‘Can you fly’ and is called ‘Black Box’ caught my attention, I think it has real Bowie-esque vocals (not a bad thing in my book, I love Bowie!). It has a very space-age psychedelic synth based rock vibe going on and I like that about it. They do seem interlinked like two parts of the same story.

Were Black Box and Can you fly written separately or consecutively?

No they weren't written consecutively, in actual fact they were written sometime apart. 'Black Box' came first and was abandoned several times before we were happy enough with the structure and the musicality. Can You Fly was relatively more straight forward and simpler to write. However, you are right to guess there is a connection, 'Black Box' is basically about a plane crash and well 'Can You Fly' is kind of self-explanatory.


The singers vocals are very melancholic by nature but the music is definitely able to set the tone of the track and I think this is demonstrated here. The almost tickly delicate guitar intro with the faded echo-y vocals gives it a more upbeat sound and it seems altogether to be a very considered track.

The lyrics to this track I do really like. I like the angst and the tension that is created by the vocals. Anyone who knows me knows I love an angry song! My favourite line is:


‘I need to know, what is it in me that made you hate me so’


Other highlights for me on this first set are Safe, Grave and Smile.


Moving onto the second of the three sets, Food that Moves, and my instant favourites were:


I can't see the light


The change in pitch of the vocals is a nice change and this song (as has been commented) is quite Bluesy. At about 2 minutes in its almost as though the song changes to another one but the melody is still carried on very subtley and then is more evident as the song progresses. I like this because when the first part ends, there is some synth sound like a computer dying and this lull and guitar solo for me represents some kind of reboot. One of the pleasures in listening to music is that you can interpret it in your own way, but I wonder…


Can you talk me through the creative process of the track ‘I can’t see the light’? I have my own interpretation of what is going on there and am intrigued to know how different it is from the intention you had?

It's quite hard to remember back to any particular point for creating this song, however Heath seems to remember that he originally wrote two seperate songs which became merged together.

Towards the end of the track, the tempo changes again and this sound very much reminds me of the sound that they seem to move more towards in the third set (we’ll get to that very soon).


What can I say about this? I‘ll leave you to be the judge this time, especially as I find it quite a sexy number!


The third and final set is a group of …’Roughs for new album’. My favourites…

If I am feeling a little reflective, then this song is the one that has the ability to make me cry. Everything is kept very simple and that is what gives it that strength and passion.


One of my favourite tracks is ‘Please don’t change’, it tugs at my heart strings and has the ability to make me cry at times. What is your favourite track so far?

We all have different favourites. The songs that are the most difficult to form are probably the most satisfying, although a fresh song, or a work in progress is often the most interesting to us. Anyway seeing as you asked: Heath is really into 'Hurricane' at the moment, and other favourites amongst us all are currently 'Safe', 'Black Box', and 'Please Don't Change'.

I think this song is a good transition track between please don’t change and Hurricane, What do you think? It's quite unusual for the drum beat to take my attention on a track, but it does on this one.

Having heard some of the other tracks we know that they have the ability to add multiple layers of sound alongside the melody. This add dimension but I also think that they can do simplicity. I love the slow tracks as much as those with a quicker tempo. I am not usually a big fan of auto-tune but used correctly it can definitely add to a song and this is demonstrated by beethum, but who do they get compared to?

Are there any artists that you are often compared to?

We're open to any comparisons we just might not agree...

Who are your musical inspirations/heroes?

Anything from Elvis and Sinatra to D.O.A and Aphex Twin...

I think their sound is most definitely coming together and I, for one, am excited to hear what’s next and so…

Whats next for you guys?

Not sure really - we're interested to hear what people think of the music, so we guess getting heard is a priority. Maybe a gig or two...?

I have taken to always asking which track artsits would cover if they were to be invited onto 'Live Lounge', what track would you cover?

Having been played on BBCIntroducing two weeks in a row there is no doubt that these guys have something to share. So have a listen, let me know what you think or better still let them know on SoundCloud.

They have just recently joined Twitter so get following beethum here.