This band have been in my 'in progress' file for far too long!

I came across them on Soundcloud, I am not sure how exactly but I am very glad that I did.

The only thing I do know for sure is that it was September. I know this because, oddly for them, they have indirectly influenced my current novel. The novel came about from a short story series which I was writing at that time and that I then stopped writing in order to develop it as a novel during NaNoWriMo. Suffice to say they are interwoven into it in the following ways: Carlisle is a setting for some scenes in the book and one of the characters surnames is Mason.

But onto the music!....I would like to introduce you to... 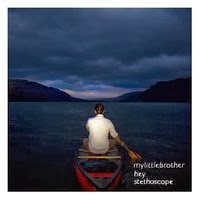 1. I came across you on soundcloud via a recommendation, or at least I think I did, and wondered if you could give us a mini-bio of the band or a mega-bio whichever.

mylittlebrother were formed when a group of people who like music got together and, fuelled by gin and haribo, wrote and recorded some music.

I am sure you could add gin during the production process of haribo....hmmmm...anyway, I think we need a song...usually I would review the back catalogue of the band but with a new EP out since January and a tour in March, let’s focus on that EP for now.

People have said we sound a bit like: Dennis Wilson, Syd Barrett, The Kinks, Clifford T Ward, Grandaddy, Sparklehorse, The Beatles, Graham Coxon, The Beach Boys... We are more than happy with this.

I could instantly hear the similarity with Dennis Wilson, it’s hard to put my finger on why though it’s definitely something about the vocal tone which is odd as they couldn’t come from further apart, in location and decade. But the lead singer of mylittlebrother does have a beard too.

Looking at the selection of artists it is most evident that they may be predisposed to a 60s tinge and in a good way.


2. Where does the band name come from?

My sister used to always introduce me to her friends as "mylittlebrother" rather than my name, so it is a tribute to her really.

I wonder if it seems odd at all now that everyone introduces them as mylittlebrother,  after all...I don’t even have a brother!

3. Who are you musical inspirations and when did you know that you wanted to be a musician?

I've played piano since I was 5, when I started getting lessons because my brother and sister did. I guess I've been influenced by everything I've heard since. My big inspirations recently have been Dennis Wilson (I became obsessed with Pacific Ocean Blue a couple of years ago, and the obsession hasn't gone..) and Jason Lytle of Grandaddy, who I've been a huge fan of since a friend of mine bought me Under The Western Freeway several years ago. I was raised on a diet of 60s pop, and am still hugely influenced by The Beach Boys, The Beatles, The Hollies, The Left Banke, The Zombies, The Turtles and lots of other bands with "The" in the name.

They may be influenced by the above bands but it’s definitely an accumulation of aspects taken from each as opposed to any kind of mimicry. The most 60s influence track on the mylittlebrother EP in my opinion is the title track Hey Stethoscope;

4. If you had to choose one track from the EP that best represents your band, which would it be and why?

I really don't know. I think each track represents a different side of the band. I guess ‘Lovers of Life, Unite!’ is probably the best reflection though, as it is based on the contradiction of wide-eyed optimism and fatalistic pessimism that seems to be a running theme on the EP.

5. There is now a lot of social media sites, online networks and gigs etc. How do you feel about these, friend or foe?

Definitely Friend. I wouldn't be answering these questions without them! And we certainly wouldn't have had the airplay or the fan base that we're building up.

They are definitely a band that I would like to see do a hangout as their sound is not over processed and an acoustic session would be good.

6. Did you know a girl called Steve?

Haha, no. A friend of mine wrote a new song and asked me if I though the title was weird. It was, so I decided to write a song with a daft title too. Steve is a great name for a person, but it's a bit weird as a song title, so it was perfect! But the fictitious Steve in the song is a really cool bloke who's trying to nick my girlfriend (thankfully it's not real!).

I was obviously not paying attention to who was Steve in this song! I really like the track Steve and I like the contrast of subject matter (serious) vs tune (upbeat). Have a listen:

7. What has been your most memorable performance/gig since you formed the band and why?

This is a really hard one to answer. It would either be an acoustic gig that Dan and I did in London, as it was streamed online so loads of people could watch it, or our full band gig in the middle of Carlisle for Carlisle Music City Festival last year. It's our home town, so meant a lot.

They are actually currently touring till the end of the month, so go and see them and let me know how they do. Details of the tour and dates/venues can be found on their Facebook page. They are playing in London tonight! If you can't make it you can watch them LIVE online by clicking here.

They have an older EP Nosedive on Soundcloud that I whole heartedly recommend you check out, my favourite track on it is Disney films...oh and My Hypocritical Friend (we've all been there!)...and ok then, Forty Eight, Blue Eyes.

8. You already had Nosedive EP out, how do you think Hey Stethoscope compares to it?

‘Hey Stethoscope’ is more of the same really, but the production is getting slightly better! All of our stuff to date is recorded in my bedroom, and in a rehearsal room nearby, and my production skills are rather limited. But they're certainly improving!

I am looking forward to hear what they do next. I love their style but I have a penchant on occasion for something a bit more energetic and fingers crossed there is one on the next EP. Yes, I know I'm demanding.

9. If you were invited onto BBC Radio 1 Live Lounge, what song would you cover and why?

Hunting High and Low by A-ha. Because it's brilliant and hugely underrated.

Email ThisBlogThis!Share to TwitterShare to FacebookShare to Pinterest
Labels: music