Hello! How long has it been since my last music review? What’s that you say? Too long. Okay that’s a fair cop, guv! Oh dear, the influence of the next artist has already affected me. He has been extremely patient with me, as I lost my notes that I had prepared before I sent him the questions and I was determined to find them…alas I could not and my Gonzo pad is forever lost, or until tomorrow when I have posted this and no longer need them!

Anyway, this person, is someone who I came across on Twitter, it was via a mutual follower who also asked if I would review him. This is only the second time that someone has requested that I write a review about an artist and so of course I agreed. I had been following them for a few weeks and tweeted a couple of times which I sometimes think might not be best as then it could be a biased review – but it turns out (as most will know by now and although I am repeating myself here), when I review music I do so because I love it and I don’t consider it my job to denigrate the artist and so it’s not such a big deal after all, and I present to you here my favourite tracks, lyrics, and sounds along with a mini-interview with: 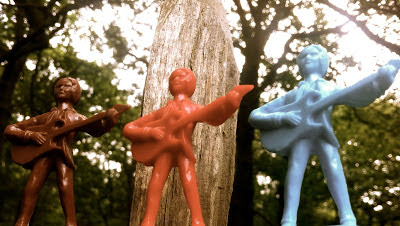 Who better to introduce the band than the man himself?!

Can you give us a brief history of the band?

Brief? You are joking aren’t you? I’ll try …
I’ve been writing songs for years, in various bands until I gave up music about ten years ago. In 2011 I lost my dad and I felt I needed to make something of my music to leave something behind when I go – not that I’m intending to pop off any time soon! So …I recruited James Buckley on drums (from One Cure for Man) and Doug Burgess who used to play in Saint Simon with James a few years back. I wanted to record an album of my old songs which we started to do but I then began writing new songs which then got added into the mix! We were recording about a night a month at Deadline Studios with the great Adam Ellis engineering and he suggested Tony Robinson, from The Beautiful South, to play some trumpet and keyboards. So, that’s the recording band but the live band’s a different story – I’ll save that for another time!

So lets have a listen to the first track uploaded to SoundCloud – its called ‘Does Madonna Dream (of ordinary people)…? I like this track because of the cultural references and the bizarreness of the question. It is very upbeat and catchy.

I like to have an artist comparison mainly so that if you are new to the band you have a general idea of who they are most like, and so I asked;

Are there any artists that you are often compared to?

I’ve been linked to every seventh band on Earth, I think, from The Beatles and The Smiths to The Beach Boys, Ben Folds, The Ventures, Muse, Arcade Fire, Dexy’s Midnight Runners, The Wonder Stuff, Dodgy, REM. Like lots of songwriters I don’t know quite who I sound like, nor do I care particularly. That’s not really my job is it? My big problem is that until the last couple of months I’ve not really been listening to that much music! I guess I’m not as interested in other people’s music as I should be!

I think these are interesting comparisons and am trying to think of the seventh band that I would compare them too, but the initial band that I thought of was Deacon Blue…I’m not sure if its sound so much as style that makes me think of them. It’s just a very laidback naturalness and it’s almost as though they have just begun singing their thoughts, there is no pretentiousness.

Having listened to woodmanstone sing about certain celebrities dreams and a few more tracks with a different feel to them, I listened to the next song, I really like this;

It not only tells a story, but it transmits a feeling of compassion and tenderness, in this case I guess as a parent but I could relate to it without being one. So, I said, I said..Oi, woodmanstone…

Who are your musical inspirations/heroes?

There are the obvious ones …Lennon and McCartney, Dylan, Morrisey
The slightly less obvious … Arthur Lee and Love, Bacharach and David, Roddy Frame, Syd Barrett
The unlikely …Noel Coward, Early 20th Century music hall
The modern …Favourites this year are Johnno Casson aka Snippet and Sea Kay – his song ‘ Stride’ is my favourite of the year.

Due to the transient nature of the band members and the fact that music is coninuously being made, I asked…
What instruments’ do you play (if any)?

I’m a rhythm guitarist, usually acoustic. I sometimes have a little twiddle but only in a thoroughly English way – I don’t really have rock n roll licks*, man! I learned to play guitar to write songs and accompany myself primarily.
(*I should mention that 90’s ‘Indie’ band The Ogdens compared my wild guitar technique of the time favourably with Ride but I’ve since lost me pedals!)

As in order to listen I had to go to SoundCloud, I wanted to know:

Are the tracks that are uploaded on SoundCloud done so in the order
that they were written and recorded?

They certainly aren’t in the order they were written. The newest available track is six months old and the oldest was written when computers had green screens! I’ve started posting rough demos recently for a select few to listen to but I’m going to stop that because no-one can hear what’s in my head and a demo is really just a sketch. I’ve realised I need to never care what other people think!

There are three tracks that are newer than this and one of those is:

I like this, how it jumps straight in with an accusation! But the latest track is a new favourite;

I think we were all waiting for the world to end in December and here we are on a Tuesday! Could it be more apt?

Another favourite, due to the lyrics as I have a weakness for a song with a positive message, and this has that it in abundance, also maybe its the storyteller in me but I can imagine this being in a musical. Can you imagine it? That moment when the main character decides that he is going to achieve his dream.

One of my favourite tracks is ‘Anybody’, what inspired you to write this and do you like to have a message in your songs?

That track was originally inspired by my ongoing failure to find any measure of success with my music!! But, like all my songs, I wanted to find a generality. In this case: dreams - our need to have them in the first place, our valiant pursuit of them, and how some people just like you or I really do have their dreams come true.

I like playing with words but I rarely use complex imagery in what I write; I search for the simplest way to say something complicated. So yes, there’s often a message in there and not too hidden. Also, I always start from something I’ve experienced and work my way out from there.

I’ve got some songs for next year that have much more explicit messages – “I’ve Got the 21st Century Blues” is pretty direct and if I can find a flute player I’ll be recording “The Further We Go” which is also ‘political’ in a Marvin Gaye sort of way but I am NOT comparing myself to him in any way!

Woodmanstone songs have strong themes of love and dreams, he does not have the deepest of voices and the melancholic sound of Empty Skies is as deep as it gets…

However it didn’t stop me thinking about who could have harmonised on that, and as I wondered aloud,

I can imagine you singing a duet, which singer would you like to do a duet with (they can be dead or alive)?

Absolutely no-one springs to mind. I’m way too insecure to want to sing with someone great and too arrogant to want to sing with someone that isn’t great! Actually Alex Turner and Miles Kane tend not to harmonise – I reckon I could put in a top line for The Last Shadow Puppets and ruin every song! I do have a habit of harmonising badly on other people’s songs!
Having said all that there is a collaboration in the offing but that’s all top secret at the minute!

Fear not! It’s not a collaboration with me although..we did sorta collaborate when I begged for help on Twitter and he came to my rescue and provided the vocals for a character in my Christmas series – which you can hear him sing here: 12 Days of Christmas

This all happened after he answered the questions for this review and crazily enough, I cant imagine why, he never once mentioned his desire to cover a Christmas tune! I did ask;

If you were invited to ‘Live Lounge’ what track would you cover?

Here there and Everywhere by the Beatles springs immediately to mind. It’s so lovely to sing, like lots of McCartney’s melodies, and I can get to the high bits which is always nice. The Beatles got me into music in the first place so it seems only right that I should sing a Beatles track.

What’s next for you?

Well, 2013 has been described as Year of The International Rock God, so I should be alright! The album will be released (finally) at the end of February. There’ll be a launch party in Leicester with a full band   and some solo acoustic stuff. I’ll be playing live a whole lot more in 2 013, mainly by myself because it’s easier and suits my new songs. In terms of that, there’s at least an album of new songs, written since October. I’m loving writing so I’ll keep on pushing myself to write, record and release more material as the year goes on. What will happen? Who knows? Where will it end? Calamity and confusion probably!

Can I go now? It may not seem like it but I don’t much like talking about myself – way too real!

And so I released him back into the wild plains of Leicester... 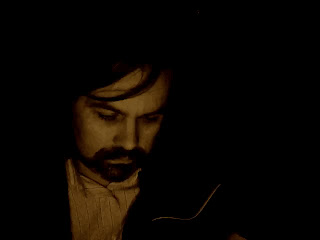 Check out the links below to listen to the tracks that aren’t here and to follow him on all social media outlets. I recommend Twitter as he is great fun…even if he does end up impersonating a New Yorker and locked in cupboards, plus it’s a great way to keep up to date and find out when his next track will be available to listen to, so get over there and say Hi! But whatever you do don’t mention me! ;)

Email ThisBlogThis!Share to TwitterShare to FacebookShare to Pinterest
Labels: music