So, this is the last Manchester band for a while (at least I think so) but I really do need to review them and finish off the Manchester hat trick! Especially as they appeared on my radar at the same time as Amida and Mutineers.

So, lets say hello to 'The Slow Readers Club' 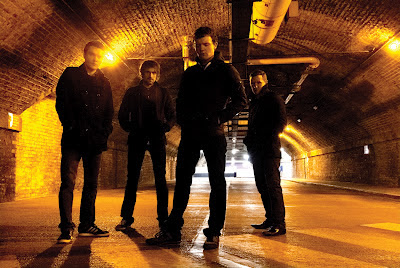 Whilst Amida leaned toward being everything-esque, The Slow Readers Club (SRC) have the monopoly on the everything-ish describer. Puressence-ish, Doves-ish, early Killers, Interpol, Arcade Fire, Editors and Pigeon Detectives are all bands mentioned in reviews and on their website. Naturally, I needed to check out the comparisons.

I listened to all those listed above and I personally thought that the similarity with Arcade Fire and Pigeon Detectives was too tenuous for me to include here, but feel free to disagree. There was also 12 seconds of an interpol track that was very SRC, but it was only 12 seconds and I need to leave space for the band clips too. Lets check out the remaining bands and see what you think.So first up...

Ironic, that when I listened to Puressence I thought, I suppose they do sound a bit similar. For most of the comparisons it is the music as opposed to the vocals and lyrics that they are reminiscent of.

Killers - Somebody told me

Its the strong vocals from the start with no build up that reminds me of SRC.

The band that I found to be the most similar were Editors and their track All Sparks...


I also have my own comparison, which I came up with all on my own! Its probably the most controversial too but when I first heard SRC, the vocals reminded me of someone else, but I couldn't quite put my finger on who. Whilst listening to all these other bands I was struck with inspiration, I really think that Aaron Starkie sounds very similar to Dave Gahan from Depeche Mode. Do you agree? Here is an example;

Depeche Mode - A Pain That I'm Used To

Time for the music under review!

My favourite track from the whole album is 'Feet on Fire', this is somewhat influenced by me singing it whilst walking to work. It has a fast tempo and I find myself racing along, it is also really easy to change the lyrics from she to he!


That being said, there are many others that I also enjoy. Their latest single release is Block out the Sun. This track was not one that I instantly clicked with, but after listening to the album multiple times it has quickly moved up the ranks to take the coveted 3rd spot, only pipped to second place by One More Minute.

Block out the Sun

Another track that I have learnt to love (see what I did there?) is;

Learn to Love The System

Two more that I really like are Sirens and Follow Me Down, and I am completely biased because I do like the whole album. But, I thought I would have 3 minutes of objectivity and let you listen to the track that I often skip! until I discovered there is no clip - check it out here.


She Wears A Frown

There is no video :(
I only dislike it because the subject matter is quite depressing,
I might like it better if there was a video!


Being such lovely lads from Manchester, James agreed to answer four questions from me. So I dug really deep into my stash of 'questions to ask bands', I dug so deep that you may spot a repeat question from an earlier post! (I am just making sure you are paying attention.)

It’s a funny and memorable band name that you have, where did the band name come from?

The band name is something that took a bit of time as we all wanted something that we liked and that suited us. It comes from being at school and realising that you get pigeon-holed from an early age. They have departments that kids get put in to more or less straight away in their school life and we tend to write about the struggles we face in life and about how we all get pigeon holed. Anyway, that's where the name comes from.

When bands release an album they usually follow it up with a tour. Can we expect to see you guys on tour any time soon?

That's the plan. We've got our album out there which has taken a lot of time to happen but we're really buzzing about it and the next thing is to sort out a tour. We plan to get dates on our website some time soon so keep coming back.

The music industry is notoriously difficult, and I imagine that some days it must be hard not to become despondent with it all. What keeps you motivated?

We don't really get despondent with it. Yeah, it's hard seeing other acts playing all over the world and basically doing what you want to do but we're motivated by writing new songs and doing gigs. No matter how hard it is or how many hours you have to practise, writing new stuff and playing live are the main reasons to be in a band. Simple as that.

Finally, I am always curious as to which song bands would cover if they went on the radio show 'Live Lounge'...so, which song would you like to cover in that situation?

This will open a can of worms with the band as we have this conversation at least once every couple of months. When in practice we might fool around and play a riff from another song and that starts the debate as to what song we would cover if we were to do one. We can never agree and that's part of the reason why we have never played a cover. The Live Lounge show tends to be bands playing a cover of a song that's currently in the charts or has been recently released so I suppose that would narrow down our options. If you're forcing me to answer then I'd say Moves Like Jagger by Maroon 5. It's not the best song in the world but it would get the crowd dancing about  The rest of the band will probably kick off but they're not answering the questions are they? ;-)

I don't know when I will get to see this band live, but you never know, so keep an eye out for the gig review. If you like what you hear check out some of the links below and share this blog post.

Other links
Check out http://www.theslowreadersclub.co.uk/the-slow-readers-club-press.html
at June 26, 2012