I was going to throw caution to the wind and just skip an intro - but then I thought, that's SO not my style! 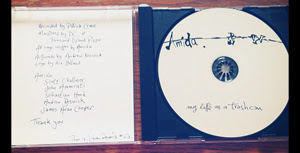 For the last couple of weeks I have been intending to post a review of an EP I recently received, the first I had hoped of many, but who knew it would be so difficult! Oh?! You did? Well, I (as usual) expected it to be pretty darn easy. It hasn't been. Hence for the last two weeks it has been mainly me thinking about it. Admittedly, last week I began writing it. 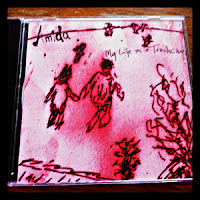 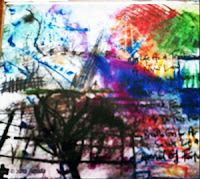 So here I am, at this place again, only this time I am going to finish it. I would like to add at this point that all views are my own, you can agree or disagree but that's the point. I only say this because my film review was heavily criticised by a commenter who actually hadn't read what I had written properly, or maybe it was poorly written by me. In any case, I wasn't about to debate this with them. After all, they are allowed an opinion as much as me.

A fair few weeks ago I wrote a post about bands using Twitter as a promotional tool. I mentioned the technique of following people (at random?) and then relying on them to check out your music and decide if they want to follow you back. As someone who likes to listen to music, old and new, I find this quite a fun way and bands that would never appear on your radar suddenly do. In the last month, I have been subjected to a veritable banquet of music and it’s been (for the most part) rather delicious. Another great thing is that the bands are not only UK bands. But I am starting with one that is.


Amida were formed in 2005 in Manchester and they have released 4 EPs so far.

Here they are kindly spelling out the bands name for us through the medium of mime.


During my research, I came across some comparisons made by other reviewers and they had described Amida as sounding like early 'The Wedding Present', early Sebadoh, similar to the pixies, pavement-esque and courtesy of my mother punky.

I will hold my hands up and openly declare that I am terrible at matching up who people sound like and who they don’t. So, I listened to the bands that Amida were supposed to sound like. I agree that they are very much like early 'The Wedding Present' - check out the song below, its not the one I wanted but its the only one I could find. If you use spotify, check out a song called Swimming pools, movie stars.

I also agree that they are pavement-esque, but I think this is only in relation to the singers voice. The singer of Amida is American and I think this is where the similarity lies. Have a listen:

The intro to the pixies ‘Where is my mind’ definitely brought Amida to mind but don't ask me why! I wasn’t convinced about there being any similarity with Sebadoh, and yes they are a bit punky.

After all is said and done, there may be similarities with the bands above, but they have their own sound too. I think Amida have interesting lyrics, and I like that they keep the tracks short. Many of their songs have made me smile and some of them will make you go, huh?! The song lyrics aren't available on the internet anywhere and as much as I like to reminisce about writing down the lyrics to songs in the 80s/early 90s and how great cassette tapes were, I didn't have the time to do that.

When I first heard of Amida, I listened to all their back catalogue and on the first listen through, I starred all the tracks that I liked instantly from each album. Their first EP, Arts & Crafts (2007) had the most stars. I also love the cover art work that is done by their bassist Andrew Beswick. Am I biased in that I love arts and crafts and thus the album title?, for any stitchers out there, do you not think that the cover is very Michael Powell-esque? Here is just one of the tracks from that album.

It started in Naples - Amida

I was about to write that this track is my favourite from this EP, but in reality I couldn't decide. I like them all and every time I listen to these guys, I find that I have a new favourite.

Their EP in 2009 called 'If the wave loves two suns' has a track on it called 'You've Changed, Baby Girl' and this was the first track of theirs that I spontaneously started singing. I have had to add a link because YouTube told me to bugger off!.


Next up was their EP in 2011, 'The Spite House Plot', standout tracks for me on this album are Box Office Poison and Oleander. The following YouTube video is a pretty cool animation, so you have to watch this one!

So , I hope by now you have an idea as to what they may sound like? Well, here is a track from their latest EP ('My Life As a Trashcan') and its called 'Starstruck Forever & Ever', I was going to post the title track but YouTube refused again! Grr!

My Life As a Trashcan

This track from the album is one that I have on repeat 'I was rude, you were fast'. The first line of the song always makes me laugh, and what an introduction.

I was rude, you were fast

Via the twitterverse I have been lucky enough to hear these guys and I hope you will give them a decent listen (i.e. more than once). You can even get a free download of their Arts & Crafts EP. They may not be everyone's cup of tea, but what band ever is?

But, if that's not enough, I have tweeted the band and they are really nice, so nice in fact that the lead singer John has agreed to answer a few of my questions....dum dee dum dee dum!!!! He is brave being the inaugural interview for this blog.

I am a new listener of Amida, and there are probably a lot of readers that haven't heard anything other than those tracks that I have posted - is there a track that you would recommend they listen to from your EPs to date and why?

John: I can't speak for the band, but for me personally, I guess the song I would put forward to new listeners would be 'Starstruck Forever and Ever' from the new record. I think it's "greater than the sum of its parts", and for some unconscious reason, I like it.

I read in the Berlin Beat interview (see link below) that as a band you all contribute from your own musical influences, writing the music first and then adding the lyrics later, who writes the songs?

John: The songs start from any random point, musically, and hopefully bubble up into something that tickles us. But what feels fun or adventurous to us might sound to anyone else just like more landfill-indie, so it's embarrassing to talk about.

So far, what has been the most memorable gig/event that you have performed at and why?

John: There are some obvious highlights, like playing NYC Popfest and Indie Pop Days in Berlin last year, but as far as memorable, we've played a lot of shows to empty rooms, or with faulty equipment, under-rehearsed, bad atmosphere, drummer falling backwards off the stage, etc, and those are the shows really stick with me.

Finally, I am always curious as to what song bands would cover if they went on the radio show 'Live Lounge'...so, which song would you like to cover in that situation?

John: It would be difficult to find a song we could all agree on, we'd probably just cover the theme song to 'Postman Pat' or something.

I won't lie, I am keen to see how they sound live and I am heading to Manchester Academy 3 on 10th August 2012 to see Amida and the Mutineers perform, so keep an eye out for the gig review.